Giving Back Through Great Golf

It was a conundrum: what to do with a beautiful piece of property that couldn’t be incorporated into Bandon Trails, but seemed simply too remarkable to be left untouched. After all, the property had been considered as part of Bandon Trails, but the challenging nature of its plunging landscape and choppy dunes made it difficult to incorporate into a design. But changing trends at Bandon—and the desire of visitors to play more golf without the challenge of walking 36 holes on a traditional course—led founder Mike Keiser to an epiphany: Why not build a short course?

As Seen in the first issue of Bandon Magazine 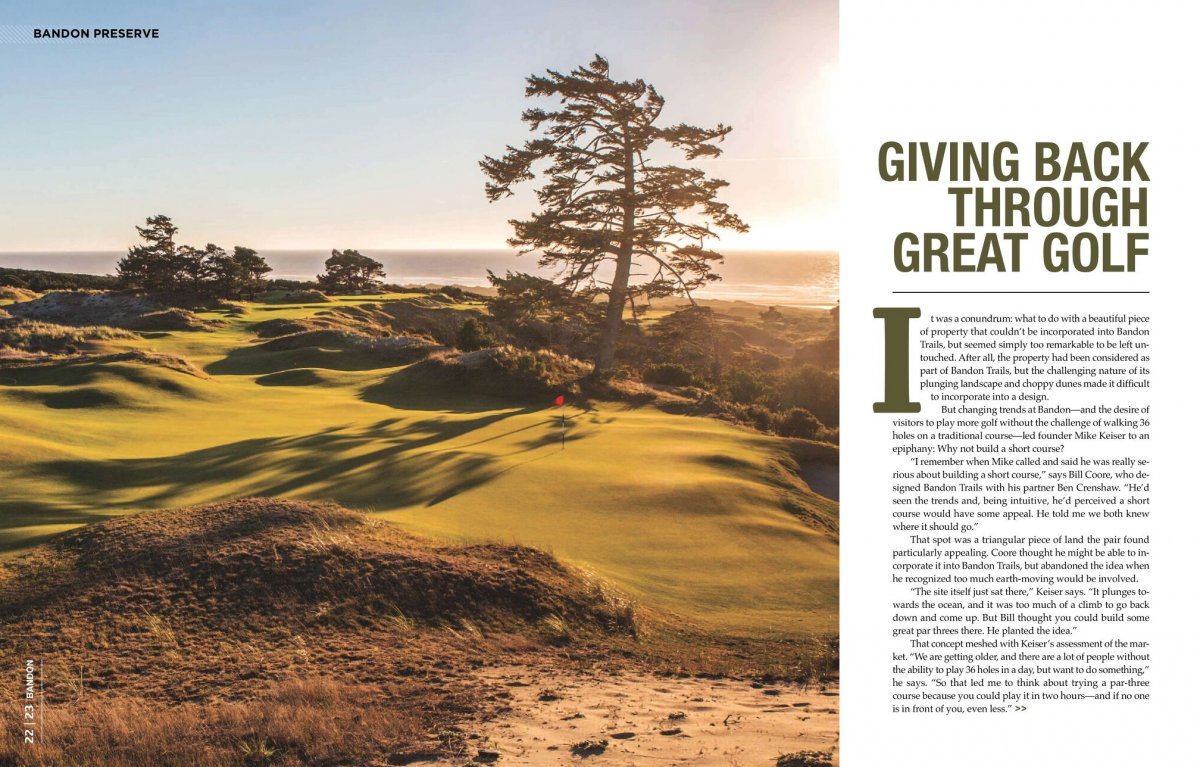 “I remember when Mike called and said he was really serious about building a short course,” says Bill Coore, who designed Bandon Trails with his partner Ben Crenshaw. “He’d seen the trends and, being intuitive, he’d perceived a short course would have some appeal. He told me we both knew where it should go.”

That spot was a triangular piece of land the pair found particularly appealing. Coore thought he might be able to incorporate it into Bandon Trails, but abandoned the idea when he recognized too much earth-moving would be involved.

“The site itself just sat there,” Keiser says. “It plunges towards the ocean, and it was too much of a climb to go back down and come up. But Bill thought you could build some great par threes there. He planted the idea.” That concept meshed with Keiser’s assessment of the market. “We are getting older, and there are a lot of people without the ability to play 36 holes in a day, but want to do something,” he says. “So that led me to think about trying a par-three course because you could play it in two hours—and if no one is in front of you, even less. 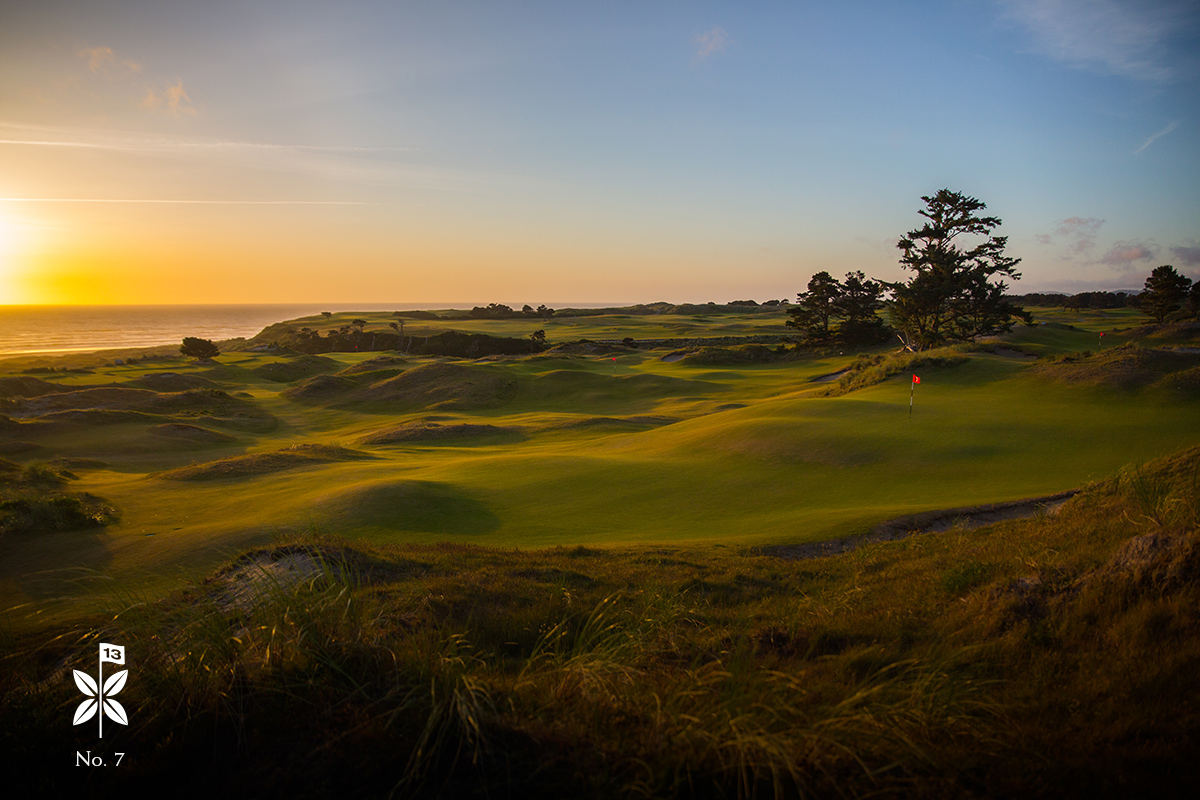 The objective of the design was simple—Keiser wanted Coore and Crenshaw to create a short course where length was not the object. In fact, Keiser said he'd prefer the holes being kept relatively short. But there was a catch—every hole had to be able to be lifted onto one of the full-length courses at Bandon and hold its own.

“I asked Mike how many holes he wanted,” Coore says. “He said he didn’t know—just not nine or 18. He wanted it to be fun, and Mike said he didn’t care how short the holes were, but he wasn’t enamoured with long holes. He wanted a quality that if you picked up one of the holes and put it on the big course, it would fit. I thought, ‘Is that all you want?’”

The result is a course where every one of the 13 holes is unique and set on some of the most vibrant, visually stunning property in all of Bandon Dunes.

“Am I surprised it has caught on with golfers? Not at all,” says Coore. “The key was when Mike set the goals. He just wanted quality golf holes you’d be thrilled to play. That set the bar that it would be extremely interesting golf on a smaller scale. That’s exactly what it is.” 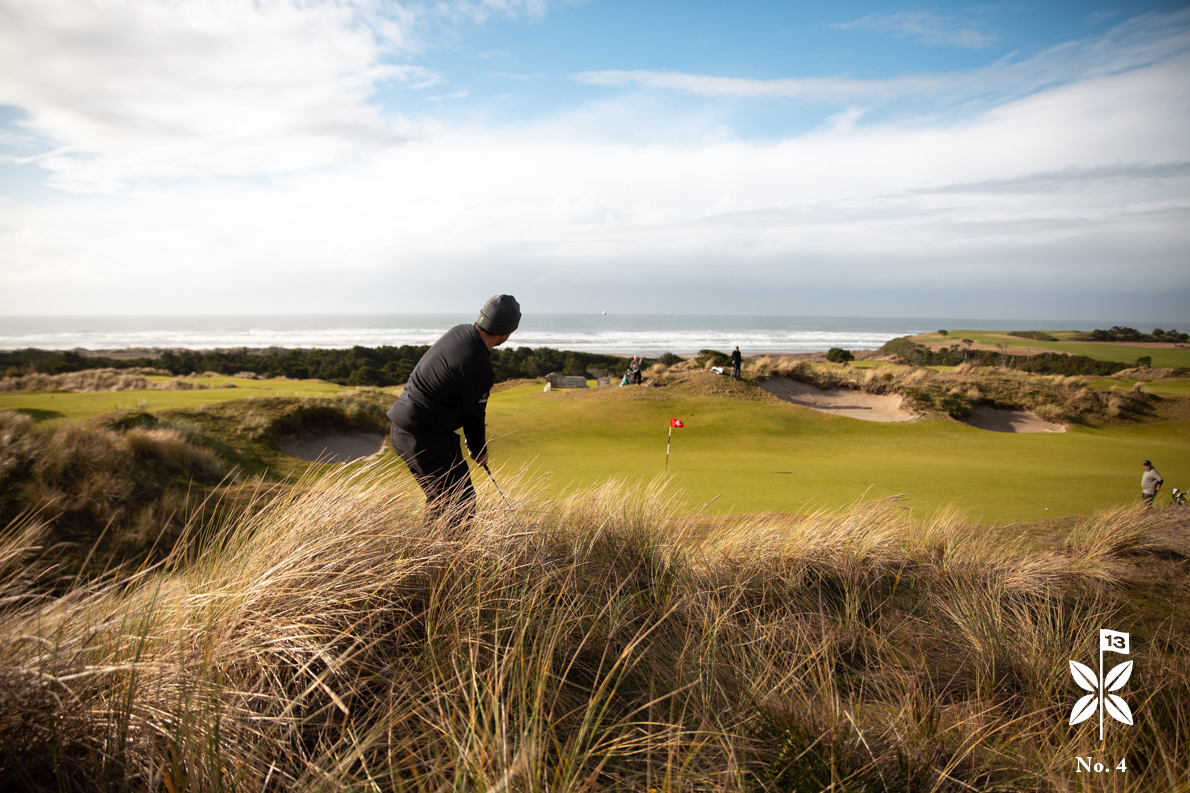 Once it was recognized that Bandon Preserve would be one of those special courses that resonated with the public, Keiser began considering what he might do with the profits. Thus the Wild Rivers Coast Alliance was born. The simple idea was to create something that could promote conservation, a concept that is important to the Keiser family.

“There are people who scratch their heads and wonder why we’re giving money away,” Keiser says. “But if you are doing conservation with strong community support, there are no politics. Everyone is in favour.” Keiser recounts something he read from legendary industrialist Andrew Carnegie, one of the richest Americans in the late 19th century.

“Carnegie said, ‘There are three things you can do with your money,’” Keiser recalls. “‘Leave it with your kids, and they will squander it. You can leave it to other people, and they’ll squander it too. Or you can give it away yourself and live to see the results.’”

WRCA has extended its support to numerous causes in its eight-year history, but one of the most notable is surely The Washed Ashore Project. 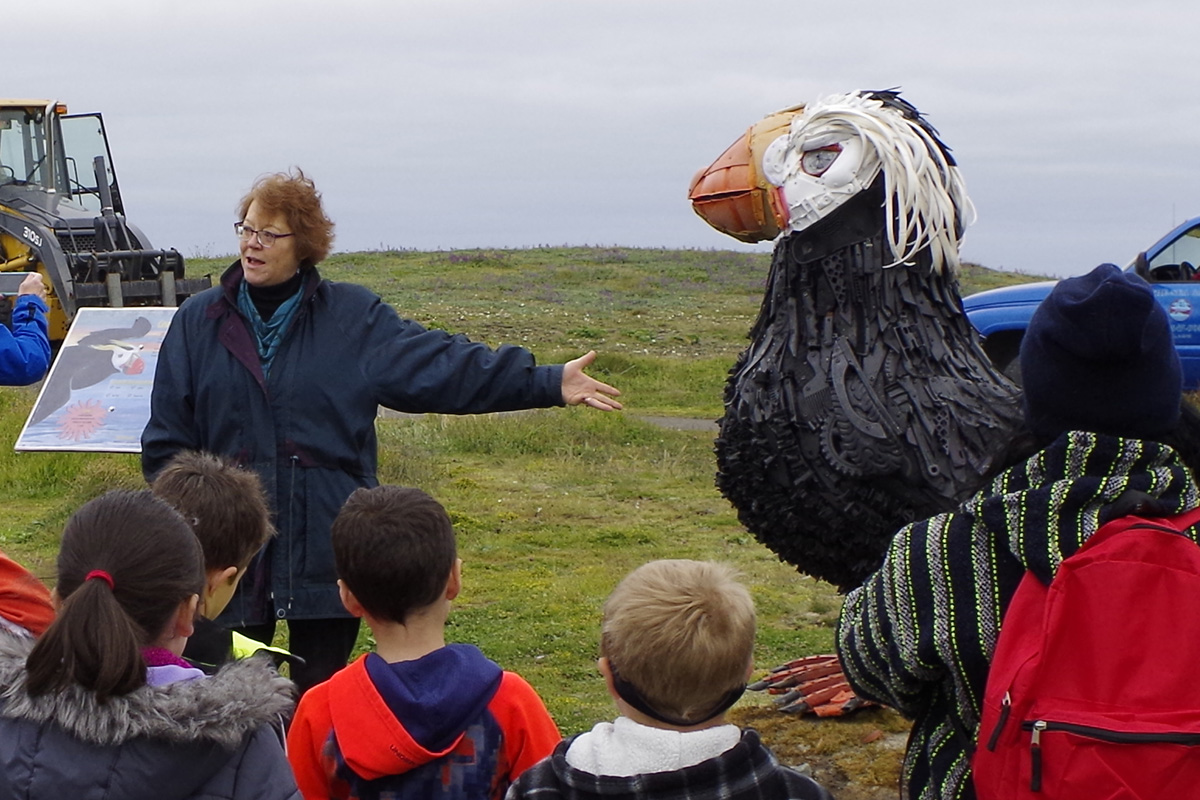 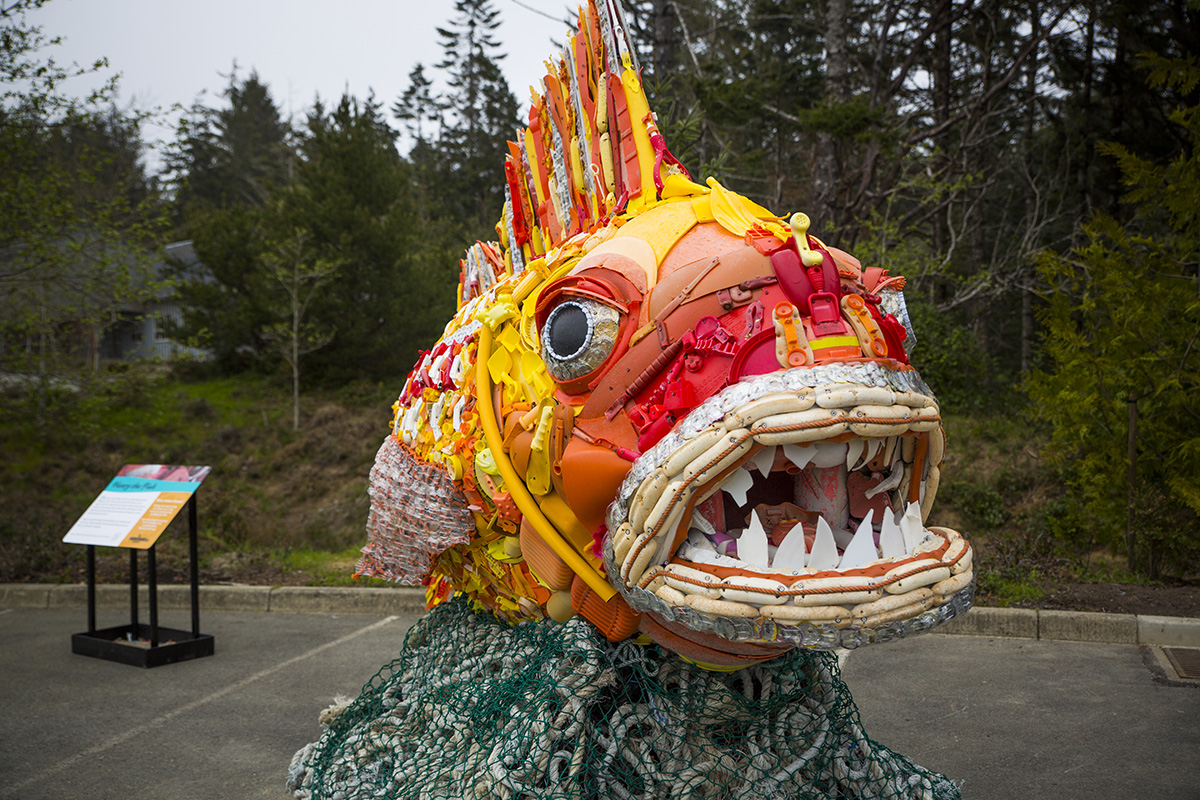 Washed Ashore was created by Bandon artist and educator Angela Haseltine Pozzi (pictured left with Cosmo the Puffin) in the same year as WRCA. Pozzi saw the amount of plastic being washed ashore on the Pacific beaches and determined she could create art out of the garbage that would open people’s eyes to the damage of marine debris.

“Washed Ashore was one of the first organizations to come to us,” says Seeley.

Through Pozzi’s direction, a global audience has learned the story of the damage wrought on the ocean through powerful artistic sculptures. “Washed Ashore: Art to Save the Sea,” was the first art exhibit at the Smithsonian National Zoo, where 17 sculptures were displayed in 2016, sponsored by both Bandon Dunes and WRCA.

“It was the idea of an artist who wanted to clean plastic out of the ocean,” says Seeley. “It has gone from this little idea in Bandon to being at the United Nations, The Smithsonian, and The Shedd Aquarium and is now becoming internationally famous. It is an example of what can be done together.”

It was a bold decision, and designer Bill Coore remembers it well.

“We were walking on the site that would become Bandon Preserve and Mike said, ‘I think we’ll give the proceeds from this project away,’” says Coore. “I remember thinking, ‘That’s going to be quite something.’”

It was a benevolent gesture Keiser would complete, creating the Wild Rivers Coast Alliance (WRCA) with the proceeds from Bandon Preserve. Working in partnership with local groups, to date around $4-million has been put to work on triple bottom line causes in Bandon and the surrounding area that are beneficial to the environment, the economy, and that have strong support from the community. WRCA has crafted partnerships to support restoration of salmon habitat, fought against the challenges of the gorse that is ever-present in the area, and worked on an innovative conservation project in the Coquille River basin to increase the productivity of agricultural lands. All of this and more from the proceeds of one par-three golf course. In addition to those grant funds, Bandon Dunes also picks up the operating expenses relating to WRCA.

“We meet people with great ideas that don’t have the resources to put those ideas into play,” says WRCA Executive Director Jim Seeley. “The goal is for the betterment of the entire south coast. We’re a small region with a small population and we can really make a difference in the area.”

Based on a three-pronged approach—to undertake projects that have strong community support, are environmentally positive, and economically sustainable—Seeley feels the WRCA is just getting started. “Our goal is to help put good thinking to work to make a difference,” he says. “It is about bringing funding to the table when it is needed.”