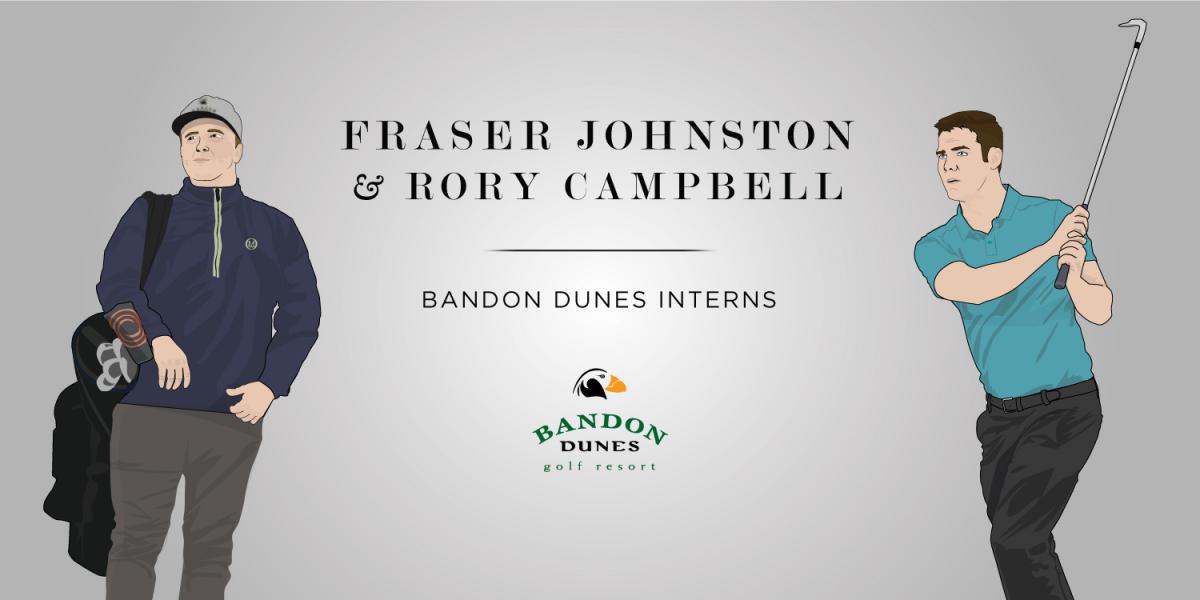 Rory Campbell has a simple way of crystallizing the differences between golf in the United States and his native Scotland.

Admittedly, Rory and his friend Fraser Johnston are just learning the intricacies of American golf, which is the very point of why they are at Bandon Dunes Golf Resort in the first place. Campbell and Johnston — who are both studying professional golf management at University of the Highlands and Islands near famed Royal Dornoch — arrived together in May as interns in Bandon Dunes’ professional golf management internship program.

It has been a whirlwind: Beginning when they received their visas in May and four days later boarded a flight from Glasgow to Eugene, Ore. — via Philadelphia and San Francisco, and then rerouted thanks to a delay, through Seattle. But the experience has been as enriching as it has been eye-opening, they both say.

One thing, though, has truly baffled them — Americans’ preference for stroke play.

“Match play is just far more inclusive,” explains the 21-year-old Johnston. “If you have a buddy who is just taking up golf, you can play against him in a competitive match. In stroke play, it wouldn’t be competitive at all. Match play is HUGE for keeping interested in the game. I don’t want to go out and shoot 120.”

“More people here go out and have to take a ‘9’ and actually have to hit all the shots,” Campbell adds. “But if I lose a hole in match play, I just go on to the next hole. Even when I play with my dad on a weekend game, we play match play. It was always more competitive and inclusive that way.”

As competitive golfers at their university — which in Scotland is more akin to a college club program than the more formal NCAA-sanctioned athletic programs in the U.S. — Campbell and Johnston know their way around a match. But neither are at Bandon Dunes or university to sharpen their playing skills. 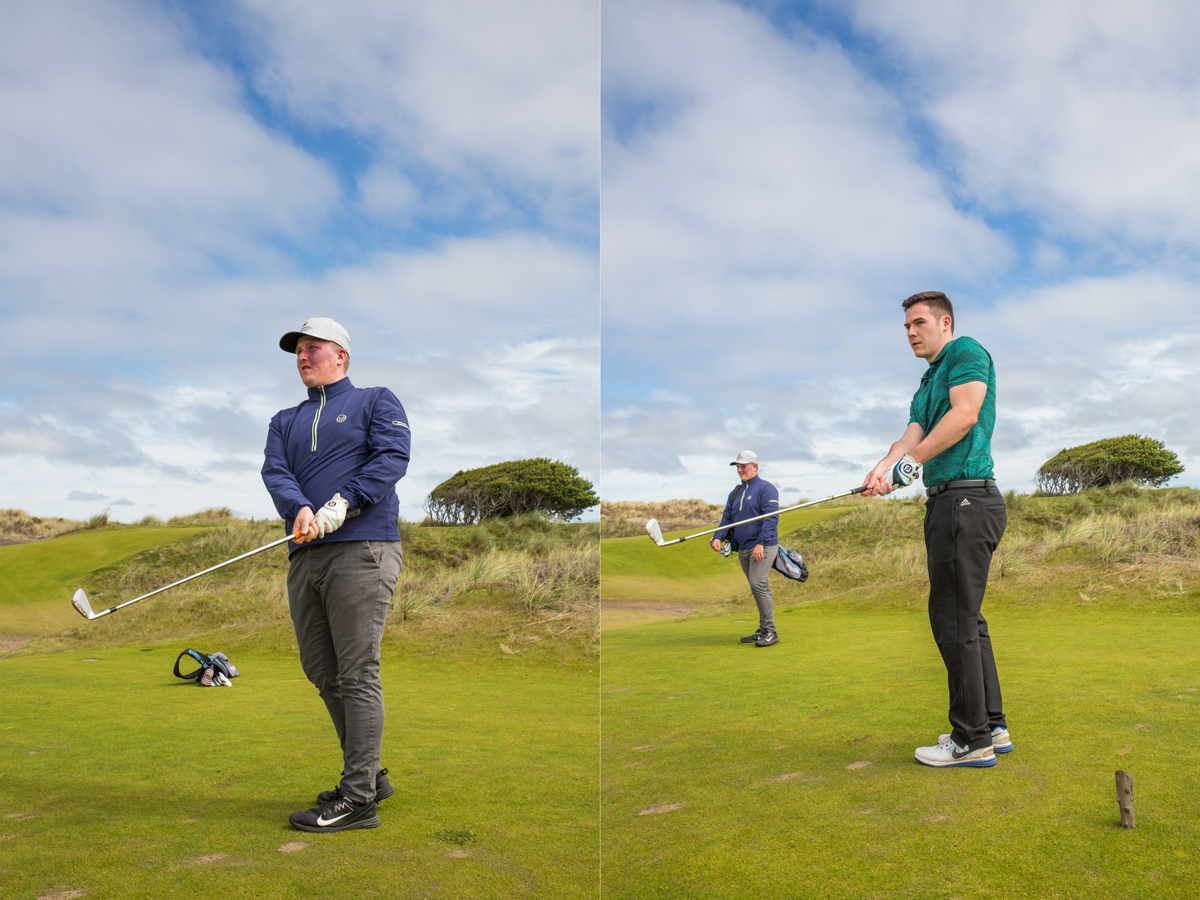 Both are preparing for a career in golf — Rory as a club professional and Fraser with an eye toward golf course design. And they are at Bandon Dunes to soak up everything they can about resort golf in the United States at a place much larger in scale than anything they would find back home.

“I realized I wasn’t a good enough player to play professionally, so I went to Royal Dornoch and joined the golf management program,” Campbell says.

The seed of golf was planted early. Johnston grew up in the small inland town of Paisley, not far from Glasgow. Campbell was raised in the self-described “wee village of Inveraray,” about 60 miles northwest of Paisley.

Their introduction to golf as young children might not be what Americans would envision for a young Scotsman. Both grew up playing tiny parkland-style courses that would often be bogged down by the moisture of the climate.

It wouldn’t be until they began to compete as they got older that they began to immerse themselves in the links game that was born in the cradle of golf.

“Even growing up it was links golf over parkland. I always hit a low ball flight and I loved the chance,” Johnston says. “The ball is never dead until it stops. You can hit a good shot and it ends up in a bunker. I like that feel game instead of just hitting a 152 yard shot and it lands 152. I enjoy the guesswork.”

As their roots grew deeper, they became more intrigued by the golf business as a career. Those interests would become easier to pursue when the university in Dornoch launched the first PGM program in Scotland.

The golf industry in Scotland is different than the U.S. Golf tends to be public and easily accessible, the resorts that are there tend to be smaller than their U.S. counterparts.

They had already come to know Bandon Dunes by reputation. Then they became more familiar through the process of Mr. Keiser and his partners in trying to open Coul Links, a proposed links course designed by Bill Coore and Ben Crenshaw in the northern section of Scotland. Impressed with a Coul Links presentation by Coore, Campbell, and Johnston also became intrigued by Bandon Dunes. 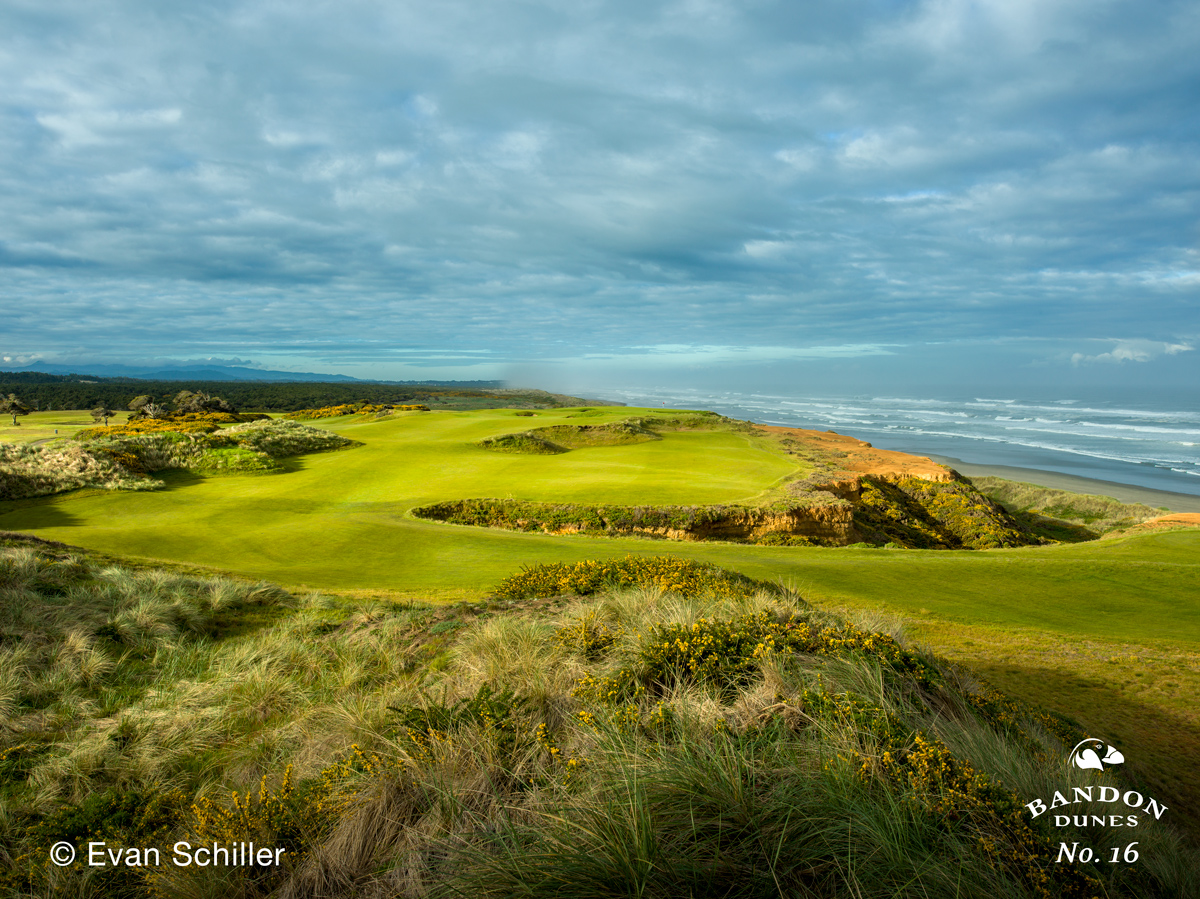 Still, the Oregon Coast was an ocean and a continent away.

“We talked about Bandon Dunes in class as an example of one of the top resorts,” Campbell says. “Then our lecturers went to the PGA Merchandise Show in Florida and met a contact at Penn State’s PGM program who told them about Bandon Dunes’ internship program. That helped open the door to the idea.”

Though they had worked at Royal Dornoch, for two budding golf professionals the opportunity to work at a golf resort the size of Bandon Dunes was irresistible. 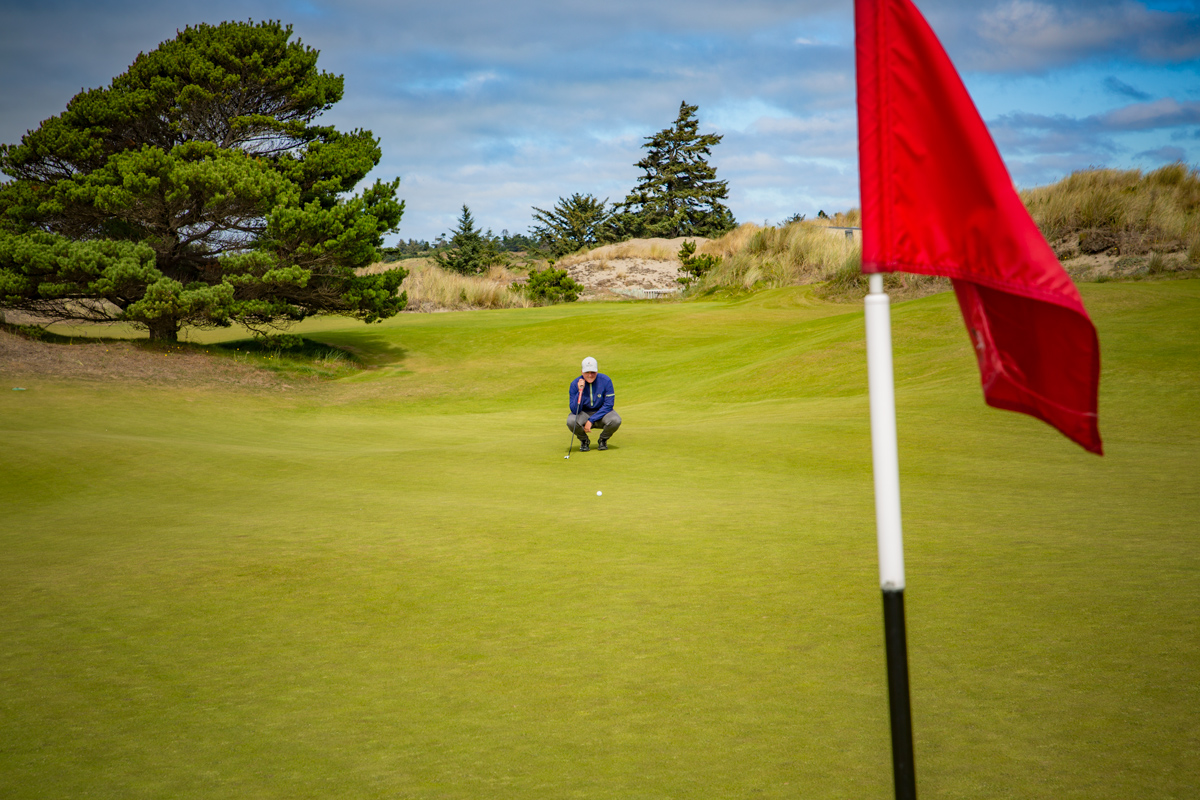 They were eventually awarded positions in Bandon Dunes’ internship program, which typically includes a little more than a dozen interns at a given time. Even a laborious visa process couldn’t stop them.

They arrived in May and the experience so far has been a combination of hard work, rigorous education, and a fair amount of fun on the course, usually playing once or twice a week. (Though not much travel, since neither has a car).

The pace of play in the U.S. seems a bit less a priority, too.

“Back home you get your foursome, you go out and play in less than four hours, you pick up if you’re making double bogey, you’d get around … then drink after and talk about it,” says Johnston.

The golf business is different, too. 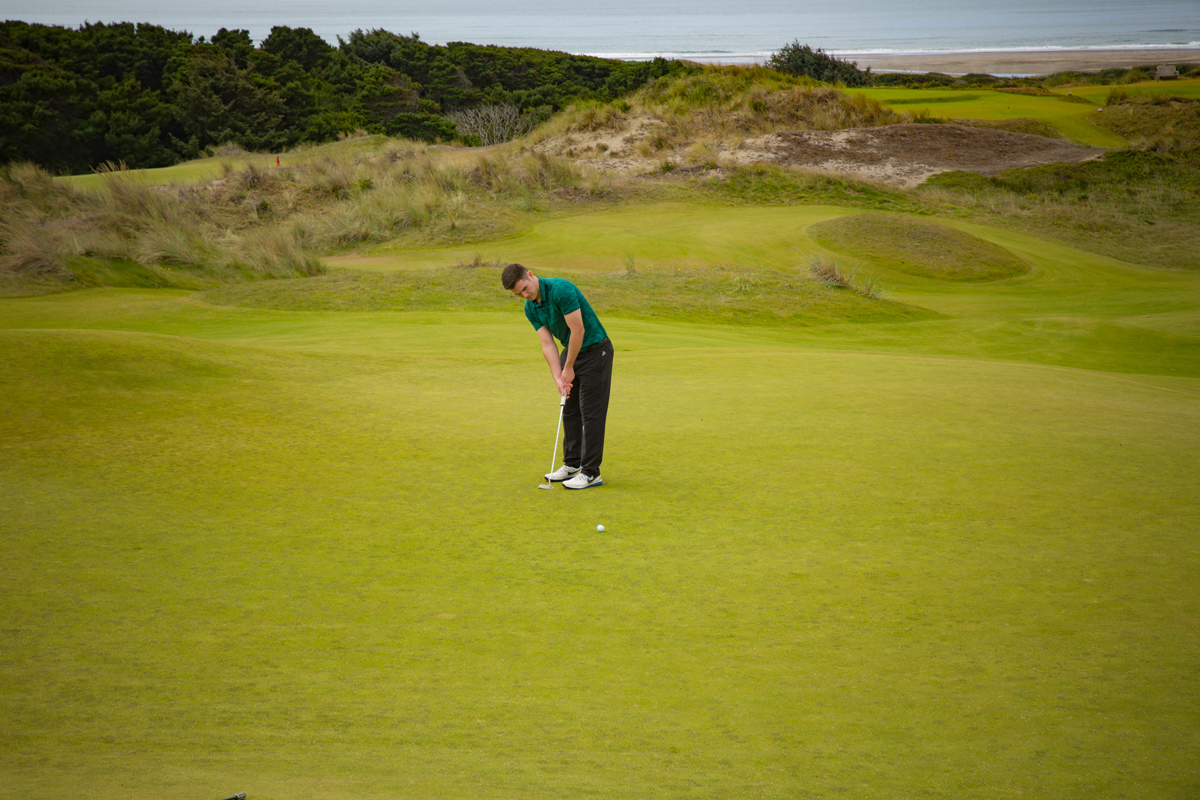 Rotating every three months, Campbell got his start in the ever-busy Bandon Dunes golf shop before moving to Bandon Trails. Johnston started at Old Macdonald and is now in the Bandon Dunes shop.

And a few things have struck them, including how Bandon Dunes treats its guests and the service Bandonistas have come to expect.

I have in-depth conversations with guests multiple times a day," Campbell says. "Conversations about links golf, what it is like working here. Bandon's guests seem really excited to know more about the resort and a lot of Americans are really interested in what it’s like compared to back home.”

They also find familiarity in the links golf. Bandon Dunes, the favorite of Campbell, is exhilarating, he says. Old Macdonald, the favorite of Johnston, plays particularly close to the Scottish links he finds at home.

“I’ve not been bored on it yet,” he says of Old Mac. “I’ve not played the same round yet, and I don’t think I will. I don’t lose balls. And I’m usually good at keeping the ball on the ground rather than the air. Yeah, I like Old Mac.”

Campbell's parents visited recently, which afforded them both a chance to see more of Oregon and beyond. So far the experience has been rewarding enough that they are both considering the possibilities of extending their stays in the U.S., or if not, returning someday soon.

“So far it’s been great,” Johnston says. “We're lucky to be here learning and I don’t have a bad word to say.”

See All
A privacy reminder from Bandon Dunes. We use tools, such as cookies, to enable essential functionality on our site as well as collecting data on how you interact with our site, products and services. Please take a minute to review our updated Privacy Policy and Terms & Conditions.
OkPrivacy policy