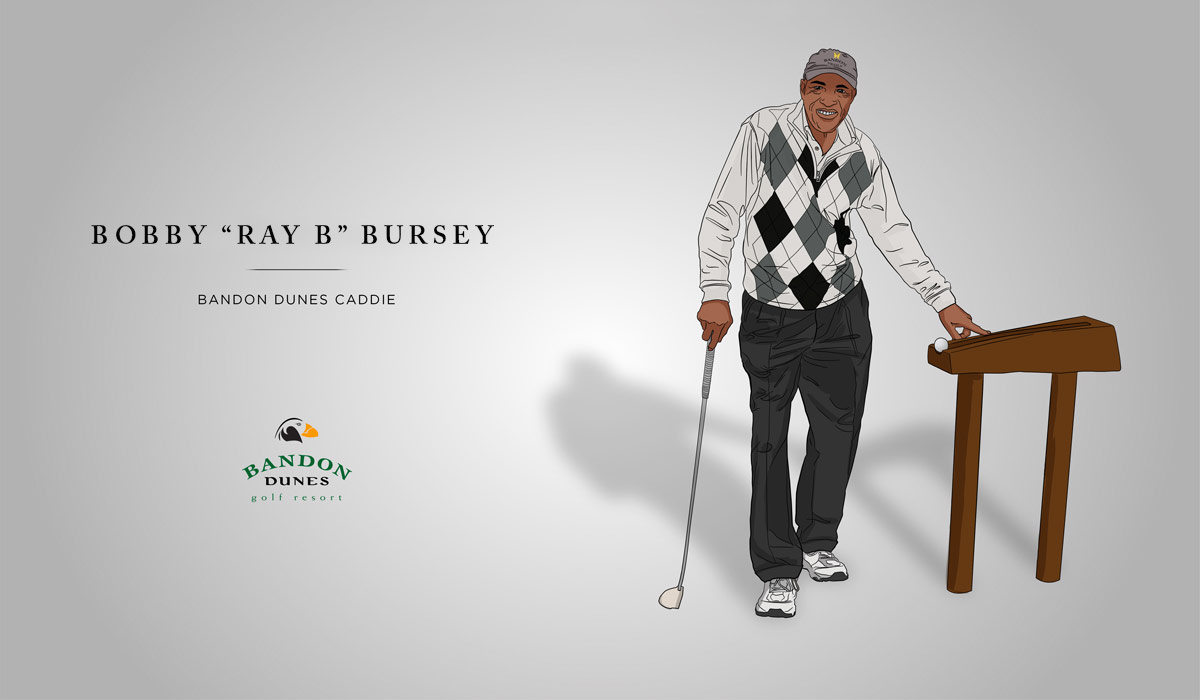 Count yourself lucky if Ray Bursey — or Ray B as he is best known here at Bandon Dunes Golf Resort — has ever been on your bag. There may be no better caddie anywhere than the easygoing and friendly 73-year-old from Texarkana, Texas.

Ray B earned his first loop at age 11 and became a professional caddie in 1981, really by accident. His career includes loops on the PGA, LPGA, and developmental pro tours in addition to stops at famed country clubs such as Bel Air and Riviera.

Ray B arrived at Bandon Dunes in 2002, when he left the pro tours for what he initially thought would be a couple of weeks. It turned out Ray B would never leave Bandon Dunes again. The father of three and grandfather of five has spent most days during the last 15 years playing his trade on what he calls “God’s green acres.” Along the way, he has become one of Bandon Dunes most beloved figures. 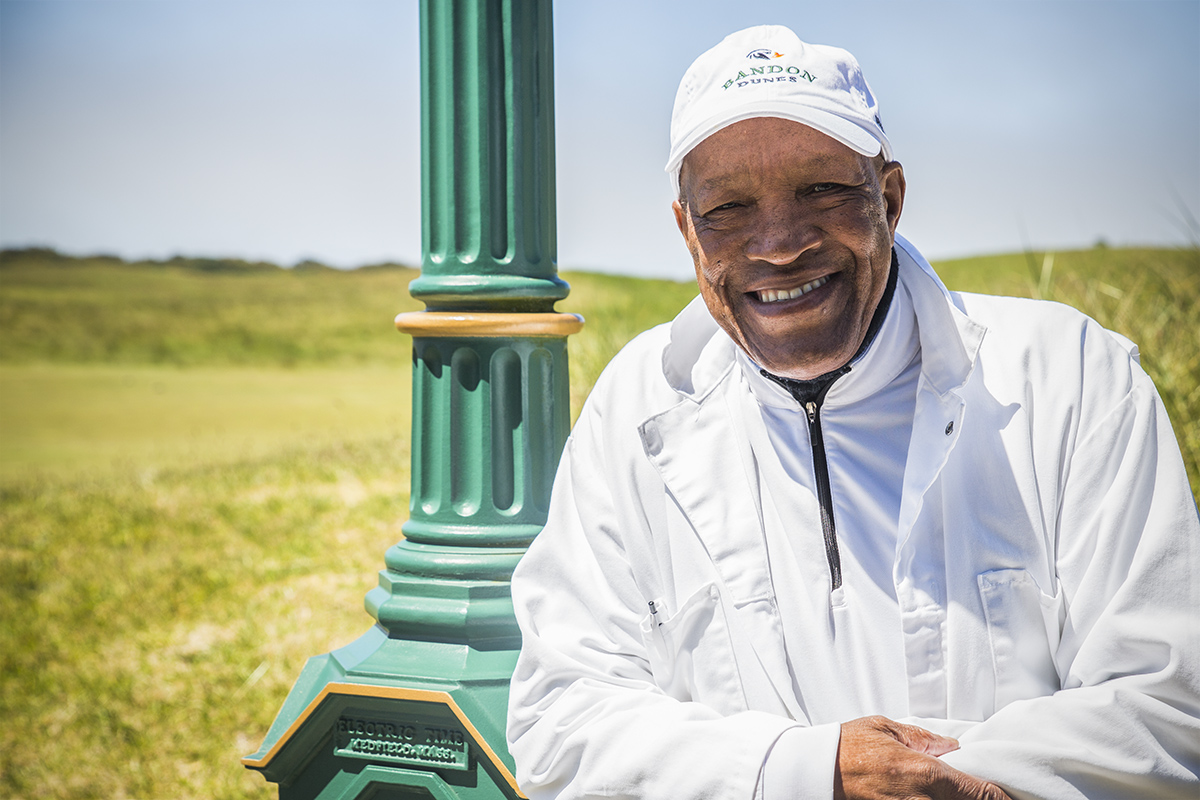 So Ray, what was your first loop as a kid like?
I could only do it once a week on Saturday at Texarkana Country Club. … The first time I went out on the course I was maybe 11 years old. The bag was bigger than I was. It was almost dragging on the ground I was so small. But every Saturday I would go out and make that $1.25. That was a lot of money to me back then.

How did you get into caddying professionally, and what has kept you doing it all these years?
I was working for the FAA during the (1981 air-traffic controller) strike, and I was playing out at Rancho Park (Golf Course) there in LA. And one of the guys made the statement, “They need caddies tomorrow at Brentwood Country Club.” They were having a big tournament. As a kid, I made $1.25 to caddie, and I said, “Man, I’m going to go out there and chase that little white ball for a dollar-and-something?’” He told me that I would caddie for a foursome and make a good salary. So I did it. … When I finished, the caddie master said, “The guys were really impressed with you and I could use you on the weekends.”

I started going on Saturdays and Sundays, and (the caddie master) said, “I could use you full time.” I saw that I could make a living doing it and I have been doing it ever since. I love it.

Do you have a most memorable person you caddied for?
John Candy (the famed late comedy star) at Bel-Air and Riviera. He used to have a Monday game at Riviera and he was a member out at Bel-Air. It was always memorable with him because he was always joking. He was just a funny loop to have.

When did you first hear about Bandon Dunes and decide to caddie there?
I had heard from some guys about this place called “Bandon Dunes,” that it was great and it was links golf. I had never worked links golf. I had never been to Europe to caddie or anything like that. And so my pro (Brad Fabel, who was then on the Nationwide Tour) was going to be out three or four months with a hurt wrist. I thought I would go and get another bag (on tour), but then I decided to to go to Bandon and see what they were talking about.

I really had intended to come for only two weeks. And the first time I saw around the corner on No. 4 at Bandon Dunes and that ocean hit me, I was hooked. Matter of fact, at the time Matt Allen was the Assistant General Manager and in the group that day. He said, “you’re not going anywhere, now.” He was right. I haven’t been anywhere else since.

What is the toughest challenge caddying at Bandon?
Bandon is unlike country clubs or even the Tour. You are constantly changing personalities. Each individual has his own agenda, his own way of doing things, and his own personality. Some guys want you to be talkative. While other guys want you to be as mum as possible. You have to figure that out the first couple of holes. You learn that fast. And if you learn that, you’ll never have any problems. 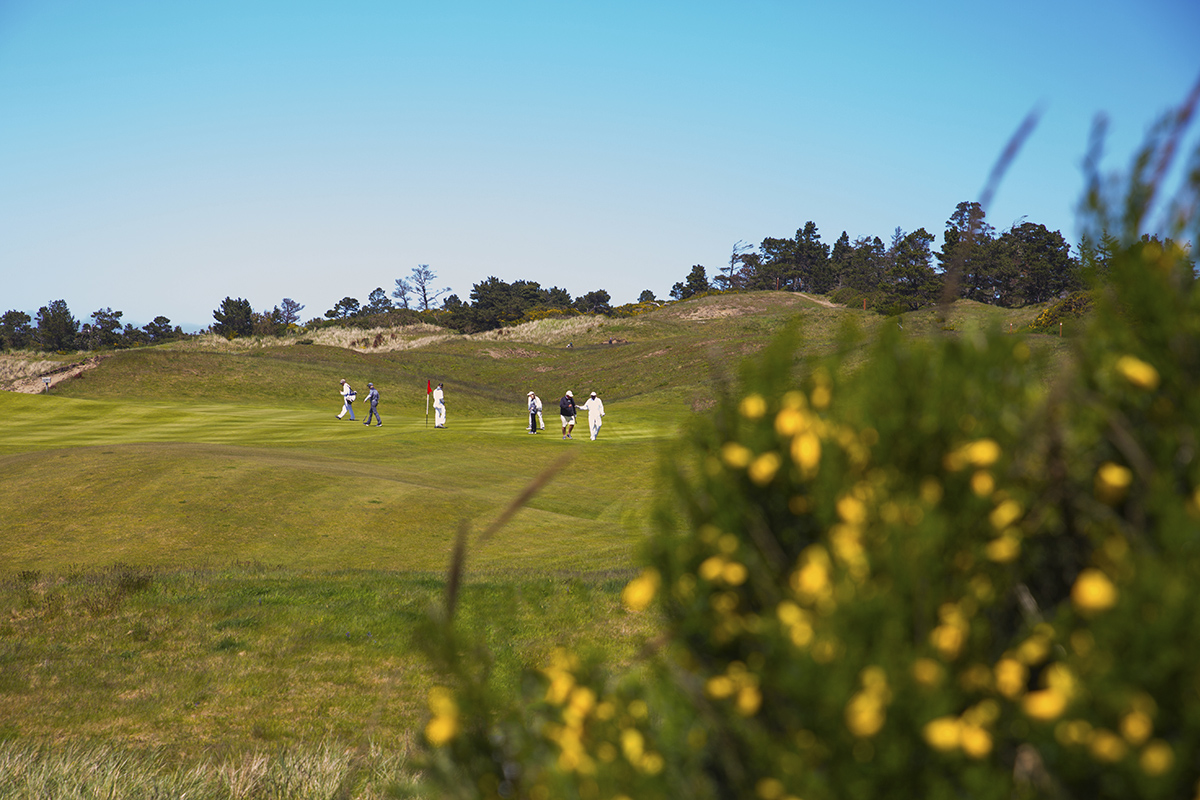 You say you had never caddied at a links course before arriving at Bandon. Have you gained an appreciation for Mr. Keiser’s vision?
I thank him every day of my life now. It’s just great golf. It’s kind of corny to say, “It’s golf as it was meant to to be.” But it’s right. It’s just GREAT golf.

Six or seven years ago we had a caddie who left to go out on Tour. He’s doing well. And I tell the young guys that if you can caddie here you can caddie anywhere in the world, on any tour, for anybody. You can’t memorize these greens. You’ve got to look from both sides, front and back if you have the time, to really get the proper read. You can move the cup a half inch from one day to the next and it will change the whole complexion of the read.

Do you have a favorite course at Bandon Dunes?
Pacific. I think Pacific is one of the greatest courses that I’ve been on and No. 1 in the world. I’m very fortunate.

Do you have a favorite regular you caddie for?
Uncle Tony (Kielhofer) and the Ginella group (who host the annual Uncle Tony Invitational), that’s the highlight of my year. Those guys are just great. Just really great. Uncle Tony has been ill (he is battling cancer), but I’ve talked to him a couple times in the last two months, and he says he is going to make it this year. He says he’ll be here.

You’re known throughout the resort as an avid sports fan. Do you have a favorite?
I like it all. Football is my favorite, and I like whoever I bet on that week.

You were the honorary starter when The Punchbowl opened and designed the first 18 hole layout. What are your memories of that day?
That was a great experience, man. Before opening day, I spent like seven hours with Mr. (Tom) Doak. Just to hear him talk about the grasses at Bandon and the Trails and Pacific, it was just a wonderful experience. 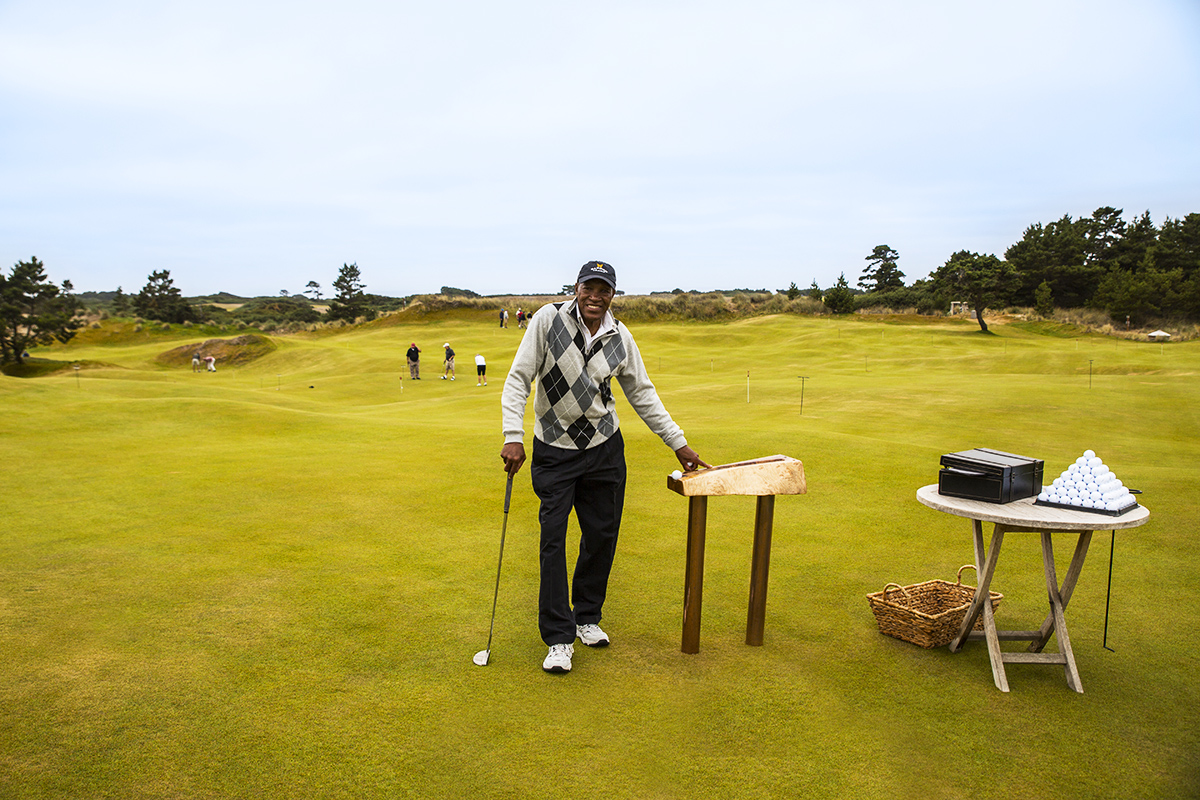 What qualities make a great caddie?
First of all, I would say they might not start out loving it. But they have to acquire a love for it. Just loving the job, it shows. You can feel it yourself. If you love the job, you’re going to do the best you can possibly do.

Your thoughts on the Chick Evans Caddie Scholarship (which offers full tuition and housing college scholarship for golf caddies)?
It’s a great thing. It gives kids work experience and we’ve had some good Evans Scholars each year come out here. They’ll never forget the experience.

What advice would you offer a junior caddie on his/her first loop at Bandon Dunes?
Be honest. A golfer will help teach you if you explain to him that you’re new. Golfers as a group always want to be helpful to another golfer or to a new caddie… they will teach you. Instead of trying to go in there not knowing and trying to guess, it’s best to say, “I’m new at this and I’m learning.”

If you could give one piece of advice to a first timer who visits Bandon Dunes what would it be?
I tell most of the people, you give up distance for accuracy on these courses. The more you can stay out of trouble, the better you can score. If you think a driver will bring trouble into play, it’s better for you to hit 3-wood or 4-iron and keep it in play and putt for par. Bogey is sometimes good in all this wind. And you will enjoy it much better than spraying it all over the gorse and hitting out of these crazy bunkers.

UPDATE: We are saddened to share that one of our great ambassadors and caddies, Ray B, passed away on the evening of Tuesday, October 3rd. The outpouring love and support that has come in from Ray B's family, caddies, staff, guests, and community members has been amazing to witness.

The feature above of the legend himself will live on forever to memorialize his impact on our family. We hope those who knew him share their stories in the comments section below and those who didn't, discover a friend they had yet to meet. Rest easy Ray B. Your wisdom, positivity, and smile will be greatly missed around what you often called, "God's green acres." Enjoy your heavenly loop in the sky.