Every golf course has its own personality. This is an abstract idea, but what does a course's personality look like? Is it aggressive? Does it reward specific behavior? Is it classical, or modern? Widen the lens on golf and famous courses come into focus. Widen the lens a little farther and the architects behind them appear. From that perspective, focus in on a modern course like Old Macdonald and you'll find a succession of holes based on interpretations of other famous holes. 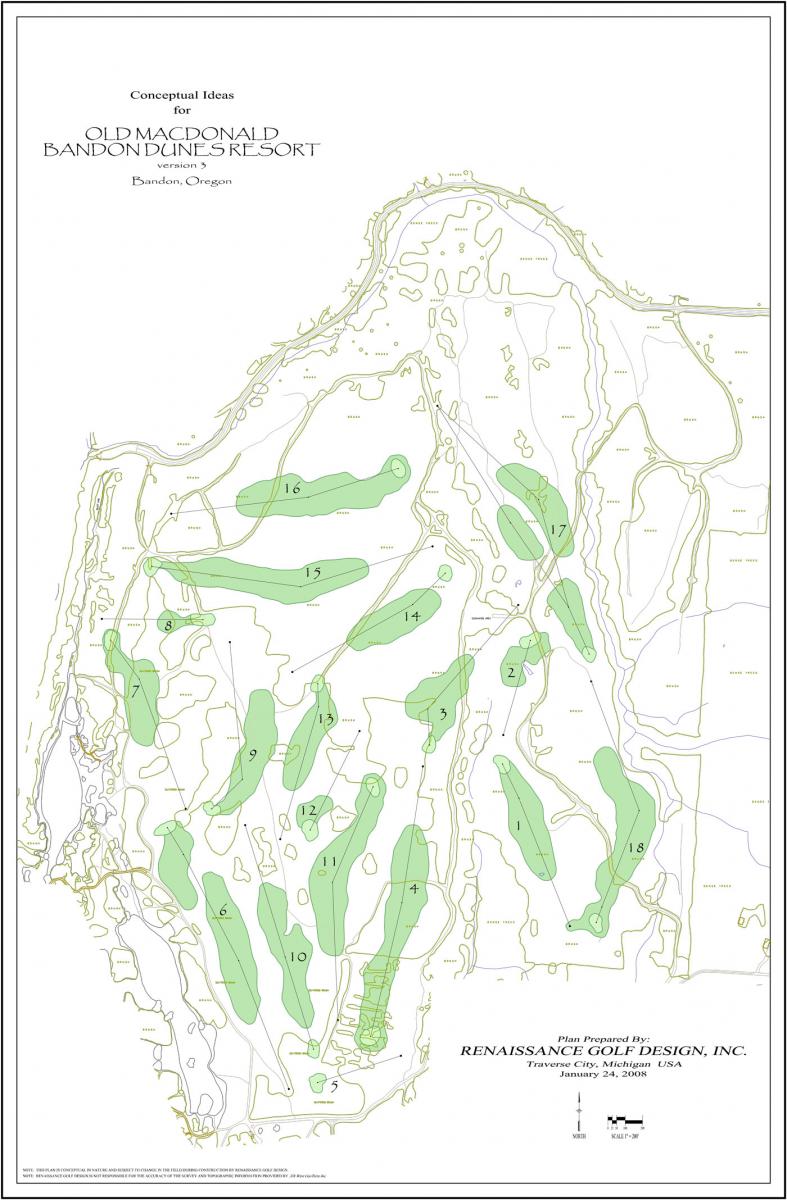 An important distinction to make is, the holes are interpretations not replicas. They were designed to pay homage to CB Macdonald and some of the most notorious architectural concepts around the game of golf.

Ever wondered where the inspiration for each hole came from and how Tom Doak would describe each hole? For insight into the character of Old Mac as it relates to the complex tapestry that is golf as a whole we offer the first nine holes as described by Tom Doak.

Check in next week for Doak’s thoughts on the back nine with more descriptions and insights!

1.  "Double Plateau” -- This is my favorite opening hole that we've ever built. There is an ocean of fairway to hit at, but several choices on where to go. Straight up the middle is fine, but a drive up to the plateau on the right or wide to the left gives a better look at the green surface, and some strong hitters may even risk the bunkers to try and drive it up near the front of the green. No matter which way you go, getting your second shot onto the front left or back right plateau when the flag is there is an excellent shot. Precedent: National Golf Links #11, Yale #17. 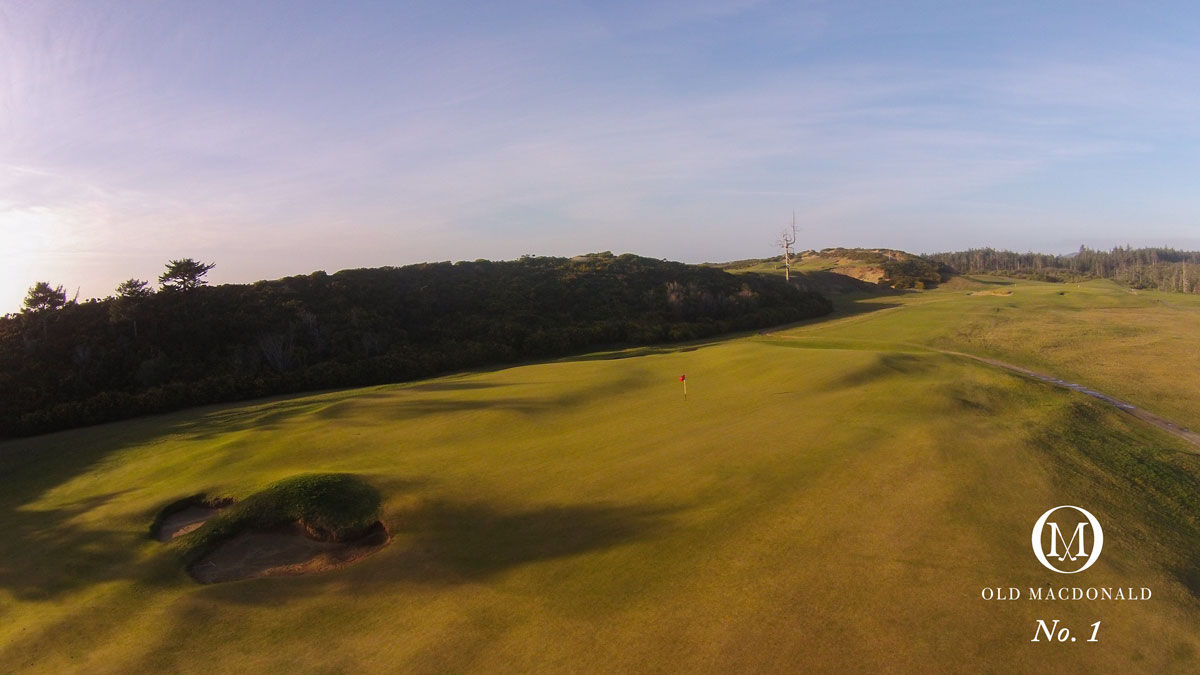 2.  "Eden” -- This par-3 hole into the wind is based on the 11th at St. Andrews, judged by many in Macdonald's day as the ideal short hole. The green is defended by a deep revetted bunker at the front right [the Strath bunker] and another fearsome bunker left, with just enough fairway in between that a carefully judged running approach can be played. The green has a severe back-to-front pitch, so playing over the bunkers is never a safe option. Precedent: St. Andrews #11, National Golf Links #13, Mid Ocean #3. 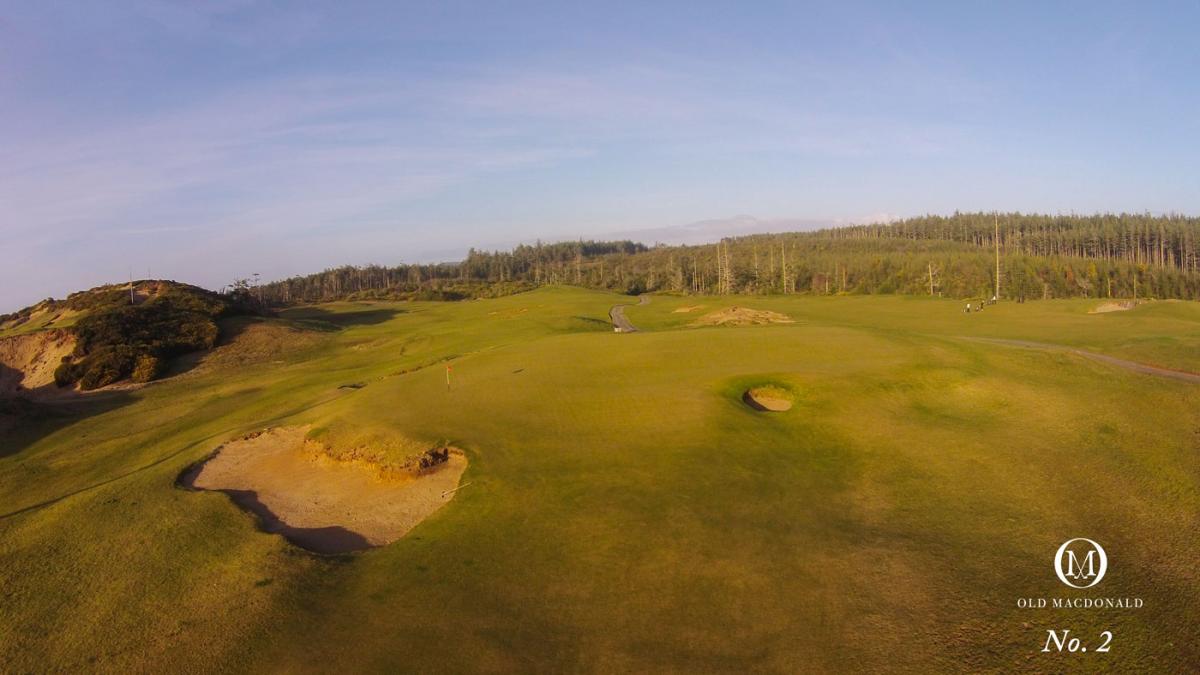 3.  "Sahara” -- A short par-4 up and over a huge dune ridge, based on the old 3rd hole at Royal St. George's in England, which in Macdonald's day was a blind par 3. The safe line to the right requires only a 150-yard carry, but you can get near the green with the drive if you dare to flirt with the big tree on the left. The green is enormous for a short pitch yet it is still sometimes hard to get close to the hole, especially when the hole plays downwind. Precedent: Royal St. George's #3, National Golf Links #2. 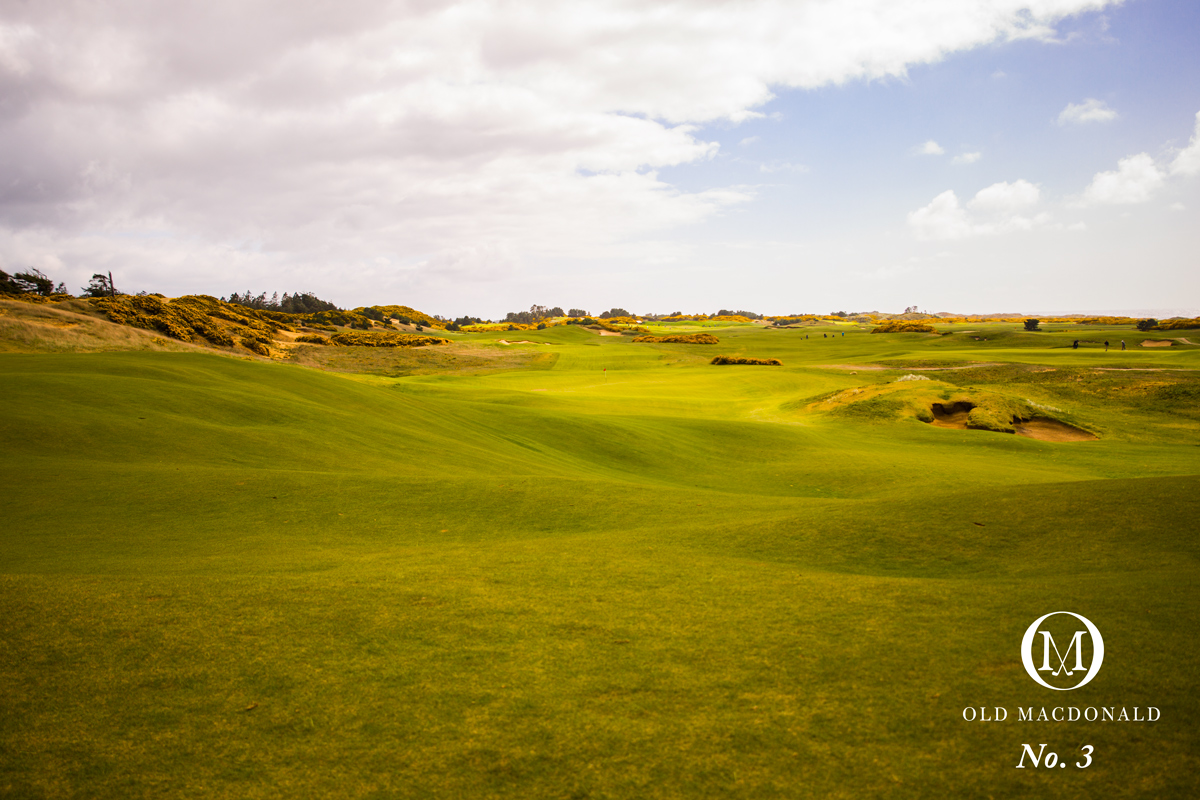 4.  "Hog's Back” -- This hole is inspired by the par-4 seventeenth at Lundin Links, Scotland. The tee shot is up onto a narrow ridge that falls away sharply to both sides -- a perfect drive will either stay up or kick forward for extra yardage, but anything less will kick away to the side, leaving a very long second shot down the valley toward the green. There is a small plateau on the left of the green that's very hard to hold; when the flag is on that side, four is a great score. Precedent: Lundin Links #17, National Golf Links #16. 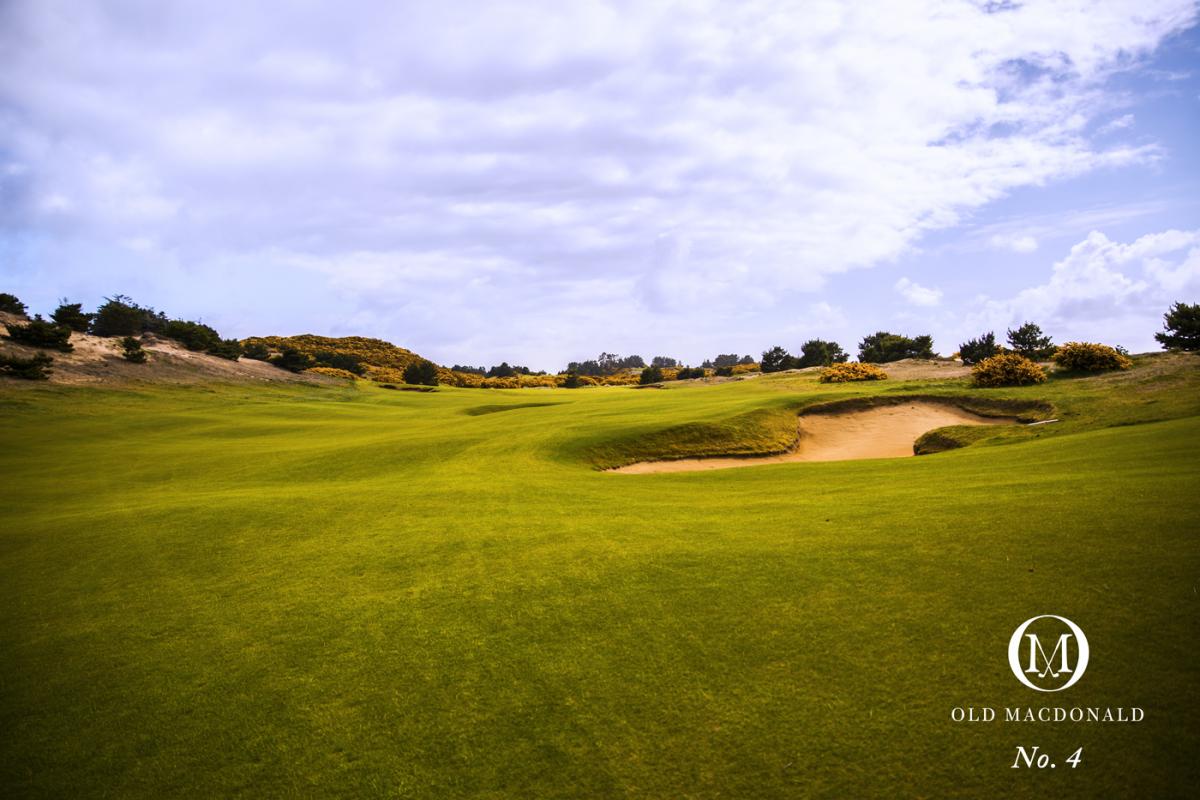 5.  "Short” -- Our shortest hole plays to one of the biggest greens on the course, but the green target is divided into several distinct areas and it is essential to find the right one to avoid a circus lag putt. The right-hand hole locations are especially severe because of the deep bunker to that side. If in doubt, miss toward the center of the green and take your chances from there. Precedent: Royal West Norfolk #4, National Golf Links #6, Chicago Golf Club #10. 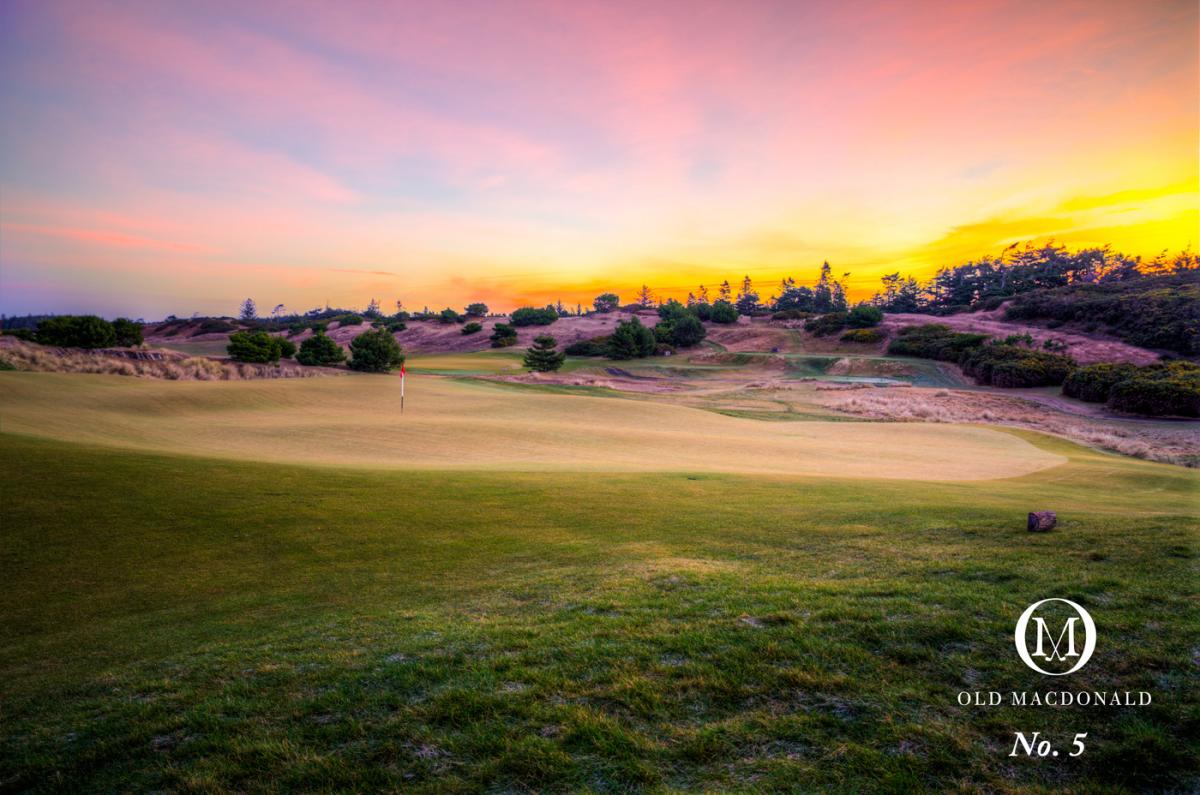 6.  "Long” -- The longest hole on the course plays directly into the summer wind, so three solid shots will be required to get home. The dominant bunker 100 yards short of the green is modeled after Hell bunker on the 14th hole at St. Andrews, Scotland, and should be avoided at all costs. The green is also modeled after the 14th at St. Andrews, with a steep rise at the front right making it difficult to pitch from that side; a running approach might be more successful here. Precedent: St. Andrews #14, National Golf Links #9. 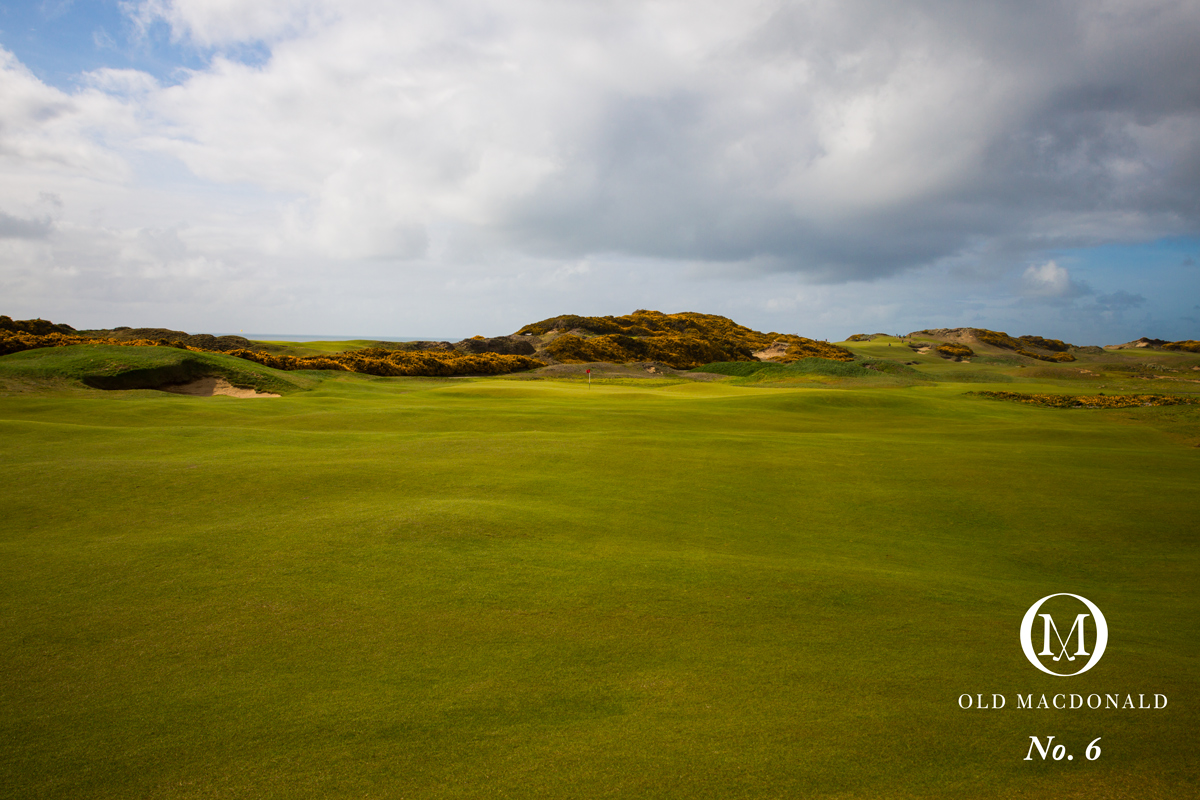 7.  "Ocean” -- This stout par-4 into the wind is not modeled after any particular Macdonald hole, but we were sure that Macdonald would have moved heaven and earth to site a green on the dune ridge overlooking the Pacific. Between the elevation change and the prevailing wind, the second shot will play much longer than the yardage, and it is best to hedge to the left as any shot to the right of the green will tumble well back down off the dune. Precedent: none. 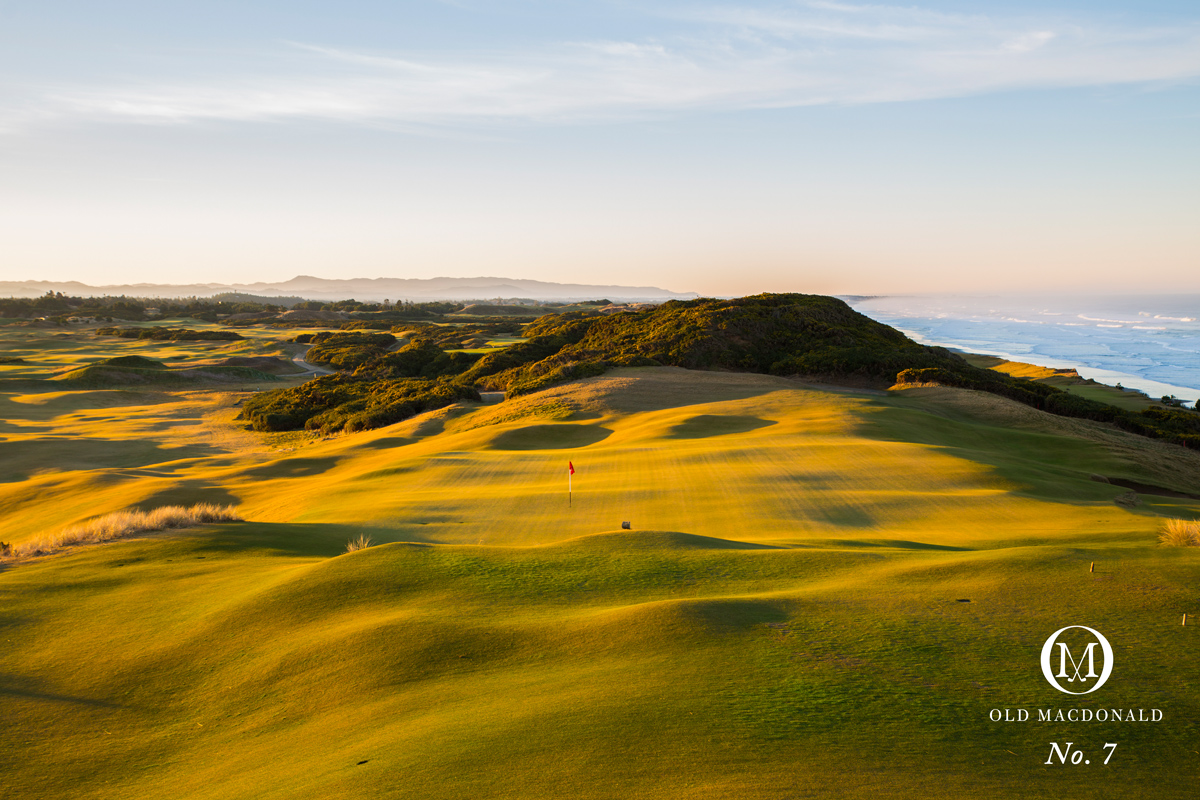 8.  "Biarritz" -- A long par-3 playing from a high tee by the ocean, down to a wild green with a deep swale running through the middle of it. With the flag at the back, many players may opt to land just in front of the swale and let the ball run through it and up to the hole; with the hole in the front of the green, it's a much shorter shot but your ball must stop quickly to avoid running down into the bottom. The original version of this hole was built by Willie Dunn in Biarritz, France. Precedent: Yale #9, Piping Rock #9. 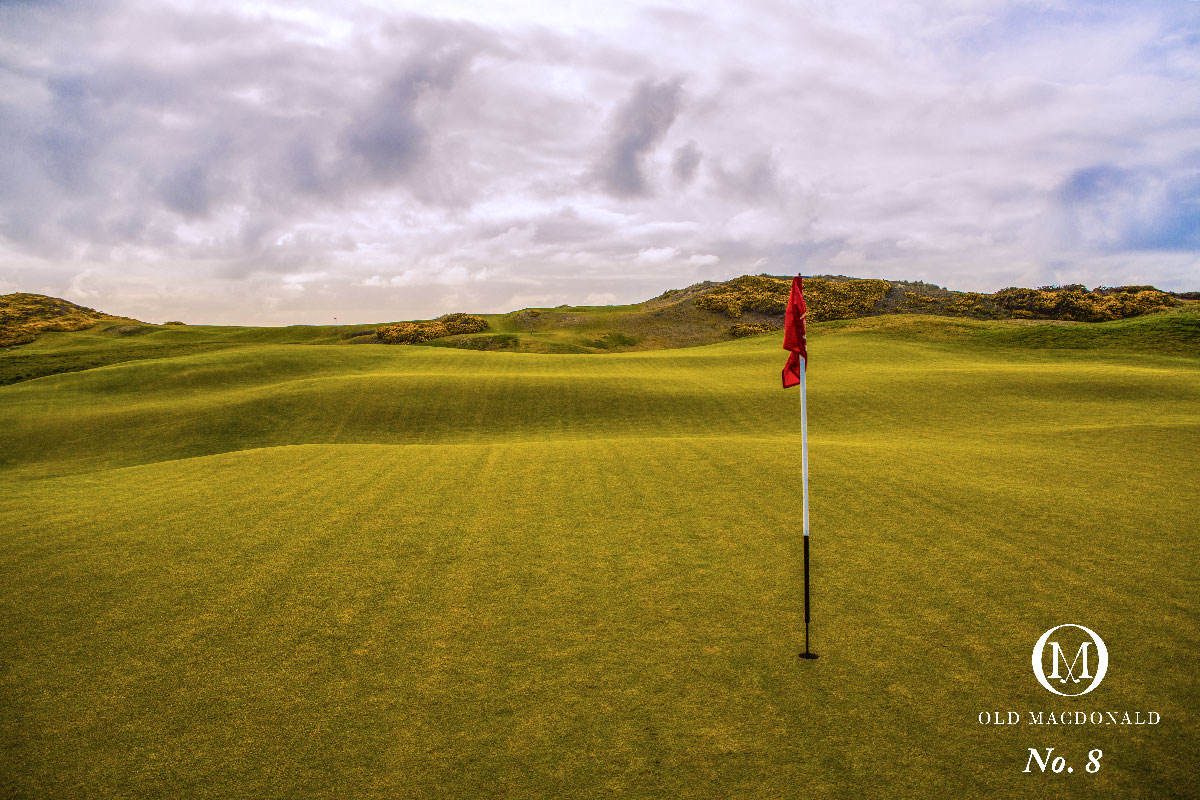 9.  "Cape” -- A sharp dogleg to the right, with bunkers and gorse on the inside corner keeping you honest on the tee shot, but if you play away from the corner you may be left with a fairly long approach to a narrow target that runs a bit away from you. This hole is based on Macdonald's 14th hole at The National Golf Links of America, though we substituted the gorse and bunkers in place of a pond which guards the dogleg at National. Precedent: National Golf Links #14, Chicago Golf Club #14. 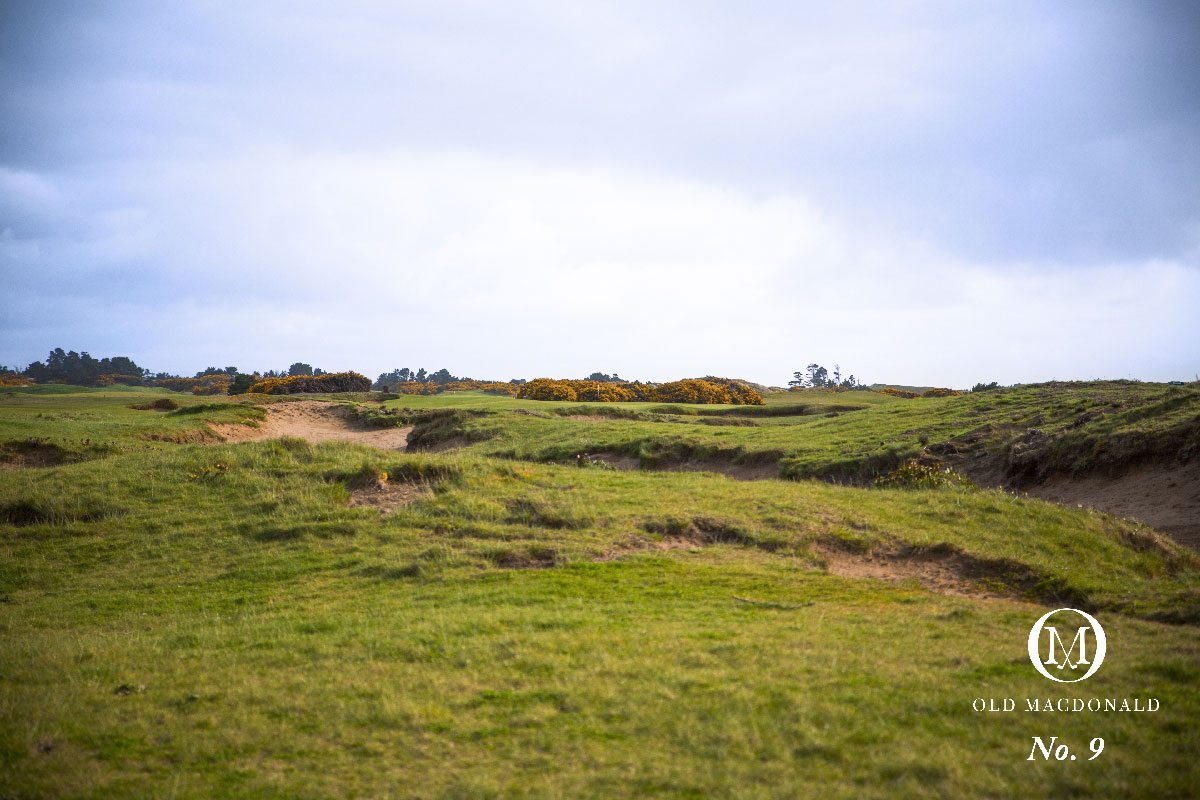 Check out the back nine of Old Macdonald (Part Two)